You’ll never look at Gill Sans quite the same again

The Gill Sans font has long been a favourite of the BBC, Network Rail and the Church of England. Created in 1928, it was the first British modernist type design, marketed at the time for its ‘classic simplicity and real beauty’.

However Eric Gill (1882 – 1940), the man who created it, was anything but. He sexually abused his daughters, slept with his sister and, how can I put it, was intimate with his dog! I’ve never been a fan of the exclamation mark but in his case it’s more than warranted.

As an exhibition at the Ditchling Museum of Art and Craft in East Sussex, draws attention to his work, it raises an interesting question – can you separate an artist’s life from his work?

From the outside looking in, Eric Gill was the complete renaissance man; typeface designer, calligrapher, artist and stonemason. You can see his work, Prospero and Ariel, at BBC’s Broadcasting House and the Creation of Adam in the headquarters of the United Nations. While the nude torso, Mankind, below is the first thing that greets you when you walk into the V&A from the tunnel entrance on Exhibition Road.

I saw it only recently. It’s beautiful.

I first came across Gill’s story a couple of weeks ago when I went to a talk, ‘The Anatomy of a Doll’ at The Royal Academy of Arts, hosted by artist Cathie Pilkington.

Cathie Pilkington’s work includes a bust (pictured below), modelled on a doll Gill gave to his daughter, Petra, when she was four. The little girl never liked it, complaining that it looked nothing like the dolls belonging to her childhood friends. She even went so far as to paint it to try and make it look like theirs. 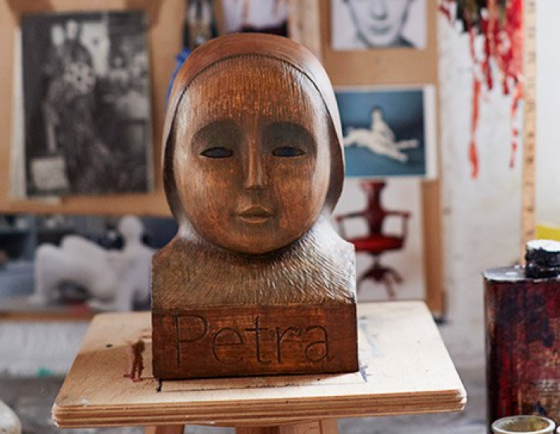 Mercifully her abuse didn’t start until Petra was in her teens, yet the knowledge of what was to come gives the doll, and indeed Cathie Pilkington’s bust, a poignancy that owes more to life than to art.

Cathie Pilkington told me that having read his diaries, she thought Gill must have been incapable of empathy. To illustrate her point she quoted a few entries from his journal.

“After he had a bath one day he wrote ‘experimented with dog in evening’.

A few days later he added: ‘Bath. Continued experiment with dog after and discovered that a dog will join with a man’.

Standing in the bar at the RA, I nearly coughed up my drink. It does however raise an interesting question. Knowing what we know now, is his work any less beautiful? Or more so because in real life his actions were so ugly?

Without thinking I couldn’t help myself. I said, “Woody Allen is still funny.”

Now I wonder if I was being too glib. What did Jimmy Savile think to himself as he strolled into Broadcasting house, with Eric Gill’s statue staring down at him? Or Rolph Harris for that matter?

But I’m muddying the already murky waters. Neither were artists. They created stuff, but it wasn’t art. Few mourn the fact Harris’s paintings have disappeared from view, and no one misses the incessant high-octane jabber of Savile.

But what about the artists whose work is of value?

Roman Polanski’s Tess released in 1979 is still moving, despite knowing that Tess’s tormentor, Alec d’Urbeville, had more in common with Polanski than audiences really knew at the time its release. Polanski’s arrest for raping a 13 year old was only two years earlier, after which he fled from America to France, never to return again.

King Arthur and his Knights of the Round Table still fascinate us. Later this month cinema goers will be treated to yet another interpretation of his adventures with King Arthur: Legend of the Sword. No one even knows or cares that Sir Thomas Malory, who wrote Le Morte d’Arthur, which was published in 1485, was imprisoned for armed assault and rape.

You have to wonder if a measure of moral turpitude, or blindness, leaves room for other senses to develop.

I also wonder where exactly do you draw a line.  At what point is an artist’s life so reprehensible that it becomes impossible to enjoy their work.

Savile sits at one end of the scale. No one will ever screen Jim’ll Fix It again. Case closed.

Gill sits somewhere in the middle. Apparently his daughter, Petra, refused to condemn her father when she was interviewed just before her ninetieth birthday. She said, ‘We just took it for granted’. Though she agreed that had she and her sisters not been home-schooled they might have realised his behaviour was abnormal.

According to reports before her death in 1999 she bore no visible scars from her childhood, and enjoyed a happy marriage with four daughters and two sons.

Still, one thing I know for certain. I shan’t be using Gill Sans any time soon.

This month I am trying new things